In Philadelphia, gun violence means that more than 1,000 people are the victims of shootings each and every year. That’s nearly three people shot each day. Across America, more than 13,000 people were killed from gun violence just this past year.

It’s time for urgent action in Washington, D.C. to tackle the growing gun epidemic that has taken far too many lives and has forever changed too many families.

I’m standing with the #WearOrange movement as part of National Gun Violence Awareness Day — and I hope you’ll stand with me by signing the petition to require universal background checks. 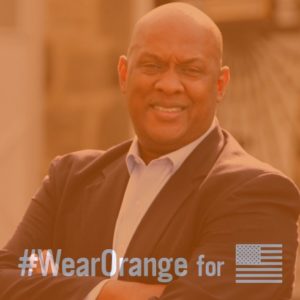 Throughout my adult life, I’ve worked across partisan lines to reduce violence as the starting block for turning neighborhoods around. That’s how I worked with Democrats and Republicans to revitalize West Oak Lane in Philadelphia.

And that’s the kind of experience and leadership I’ll bring to Washington, D.C.

#WearOrange is a movement that I’m proud to support and it’s going to take all of us doing our part if we’re going to get Congress to require universal background checks and to pass legislation that helps law enforcement keep firearms out of the hands of dangerous individuals like criminals, terrorists, and domestic abusers.

Add your name to the petition and help make Philadelphia, and all neighborhoods across America, stronger in the fight against gun violence: